Baba Guru Nanak spent his last 18 years at Kartarpur Sahib. Samadhi and Mazaar were stablished for the first time when Baba Guru Nanak departed for his heavenly abode on 22 Sep 1539. Kartarpur Sahib is a center of attention today for thousands of followers of Baba Guru Nanak visiting to pay homage on daily basis. The original abode (Gurdwara) established by Guru Nanak in 1515 was washed away by floods of the river Ravi and later Maharaja of Patiala built the present day building in 19th century. After the partition in 1947, Sikh Community migrated to India and Gurdwara was left abandoned. ETPB and PSGPC restored the Gurdwara in 2004 for Sikh yatrees after its necessary repair and maintenance. Eversince 2004, Sikh community has been performing all religious rituals in Gurdwara Darbar Sahib. However, the actual dream of Kartarpur corridor became a reality in 2019 when Kartarpur Corridor was opened on 09 November 2019 by the honorable Prime Minister Imran Khan. 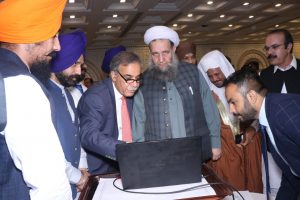 Launching Ceremony of Website of Kartarpur Corridor and Book “Historical Gurdwaras in Pakistan “On 18 September 2020, launching ceremony of ...
Read More